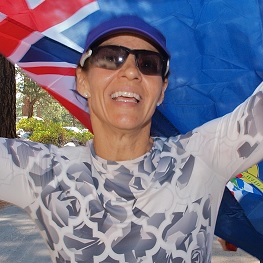 It is an honour for Kerri Kanuga to be featured next to such elite athletes on this page.  Kerri learned how to swim at a very young age in the frigid lakes of Northern Canada.  She did not start open water swimming until 2000 and has loved the sport ever since.  Kerri is a distance swimmer and her accomplishments include a double-crossing of the channel between Cayman Brac and Little Cayman, 20 km swim around Key West, and a staged swim circumventing Grand Cayman.  In 2015 Kerri swam from Starfish Point to Barkers then ran another 107 miles around the island (twice) and her love for ultra running was born.  Since then Kerri has represented the Cayman Islands all over the world including Africa, China, and Brazil.  Most notably a 4-time finisher of what National Geographic calls “The World’s Toughest Foot Race” the Badwater135 in Death Valley the “ultra running Olympics”.  Recently Kerri returned to the water and has just completed her most recent challenge of a Marathon Swim Federation sanctioned even raising money for charity.  The event was a 20 km double North Sound crossing on November 26th, 2020 from Bakers to Starfish Point then finishing at Camana Bay.